Fast forward a few years, and I found myself searching for my second project after the CandyVan, a 2000 Ford 7.3L Sportsmobile. This time around I wanted to start with a 4x4, but I knew I would rebuild the interior as I had done with the CandyVan. When the 808Van popped up on eBay and Bring-a-Trailer, I knew it would be a project, but I also knew it was the raddest rig I had ever seen and I must have it. 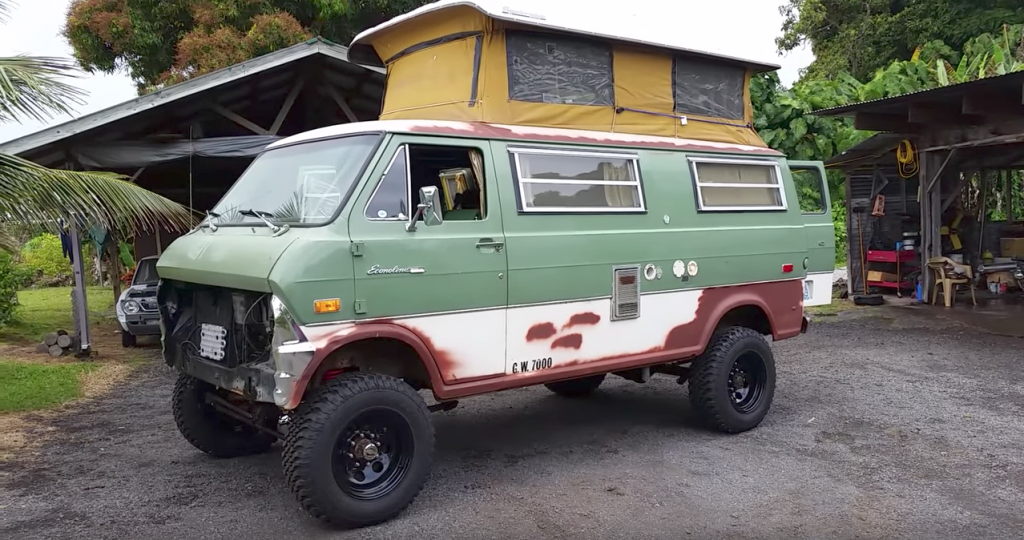 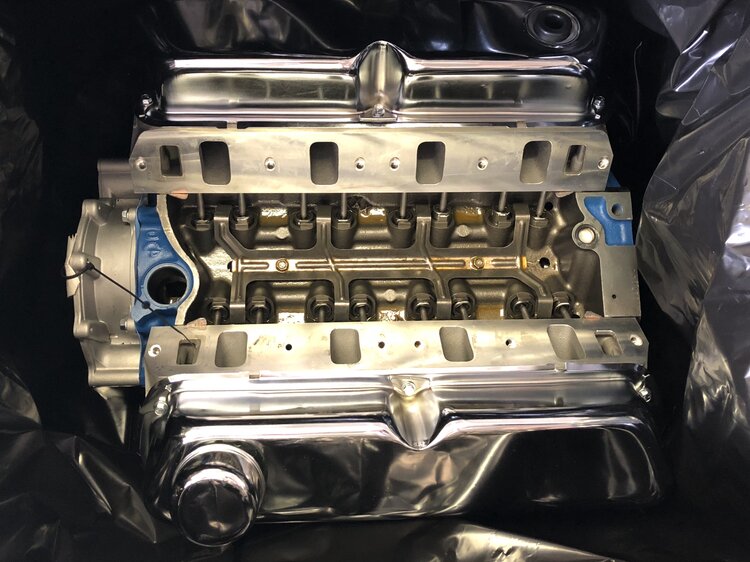 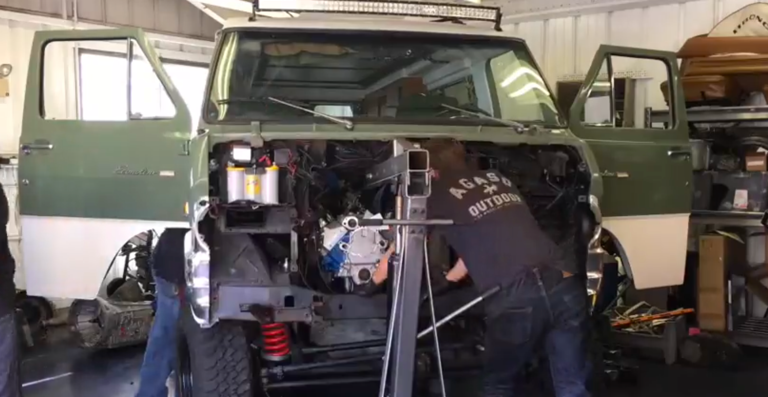 This 1971 Ford E-300 might be the first Ford Sportsmobile conversion ever, I have yet to find an earlier one. It was discovered in 2015 in a Minnesota barn and purchased by a Hawaiian, who sent it to his son on the Big Island. Braddah Dwayne did a partial restoration of the van, including the 4x4 conversion and new paint job (retaining the original Boxwood Green color). Since 808 is the area code of Hawaii, the “808Van” became a fixture around Hilo until it was sold to a collector in Palm Springs, CA. It sat there for about a year until some dumb haole bought it off eBay in 2017 (that would be me).

Driving the van for the first time back to San Francisco, I was impressed with how straight it drove with very little vibration in the driveline. The interior was cosmetically clean, but none of the appliances worked so it was not really functional. Despite how good it looked, this was not going to be some Sunday Special. I wanted the 808Van to overland! But if I knew the money, time, and stress it would take to get the 808Van ready for adventure, I probably never would have bought it in the first place. 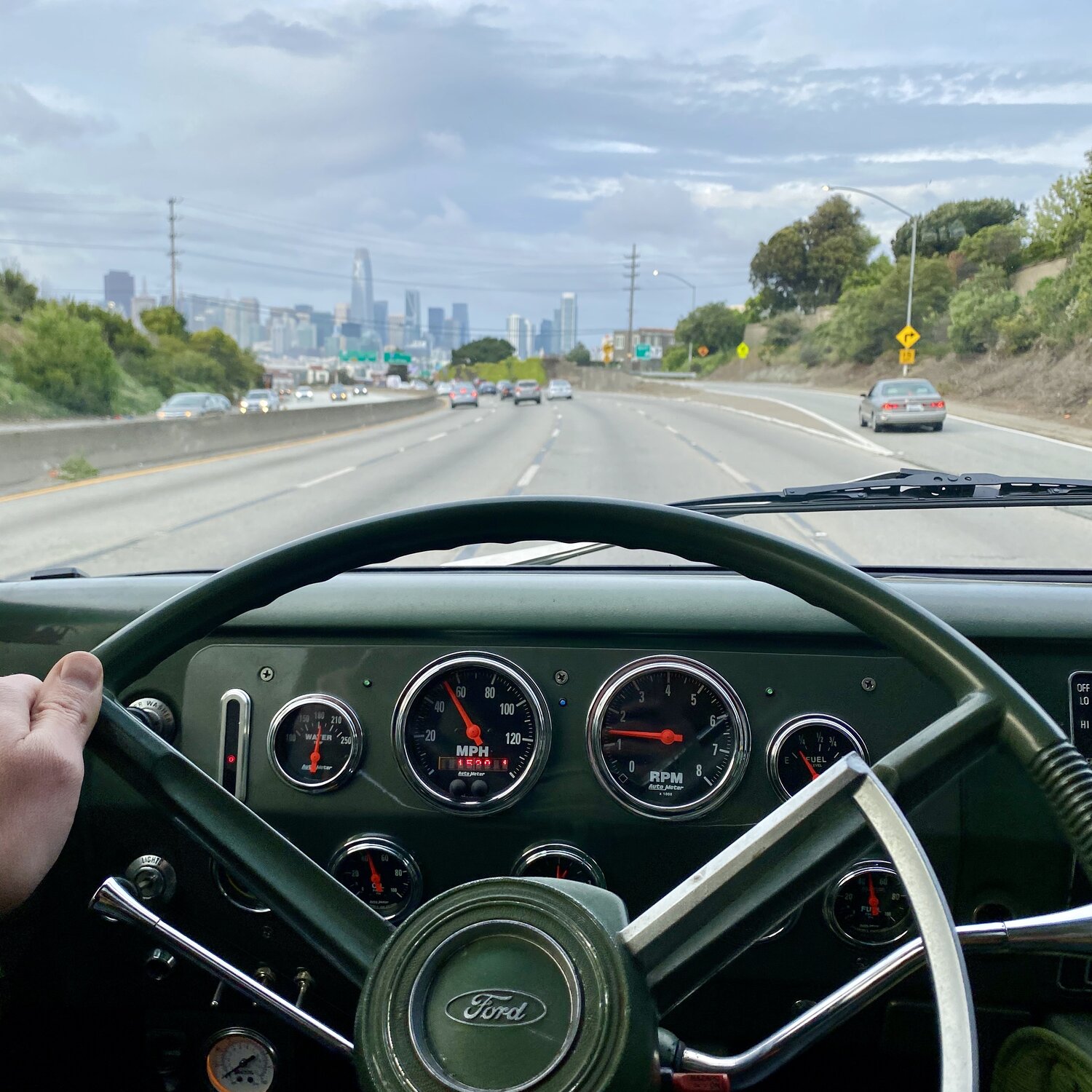 I immediately set to work planning out the build. The first project would be replacing the 50 year old canvas top. I prioritized this first as it was the one area I had no idea how to do. Luckily, The Canvas Works took on the project and did an amazing job repairing the pop-top and creating a new canvas surround. With the new top complete I could move on to the biggest part of the build: the interior.

I haven’t mentioned yet that I am a huge fan of Hawaii, which makes the history of the 808Van that much more special to me. I knew I wanted to keep a retro island vibe on the interior but at the same time update it to modern functionality. After building the CandyVan with the help of Gary at Personalized Vans in San Jose, I knew he would be able to bring my vision to life and put up with all my crazy ideas.

I’m not quite as hard core as many overlanders, but I knew I wanted the 808Van setup for 1-2 weeks of complete off-grid adventure. The 808Van has a 20 gallon freshwater tank along with 6 gallon gray water. I think this will be sufficient along with a couple of Jerry Cans for additional supplies when necessary. I also set up an outdoor shower in the huge hole left by the external radiator from the old furnace. For power I went with two 6V golf cart batteries lined in series to give me 320 aH, which combined with a 160W solar panel should provide more than enough juice for my needs. My only appliance is an Isotherm fridge, which is nice and quiet with low power draw. I keep a portable propane stove in the back so I have the option to cook indoor or outdoor.

Do you dream about van layouts? Because I do. I went through a lot of different ideas in my head, but in the end went with a basic layout similar to Sportsmobile’s RB50. I feel this provides the most interior room along with storage capabilities. I prefer to sleep up top but the bench can fold down to sleep a total of four. When it came to the materials, it was very important to stick with the Hawaiian theme. After a lot of searching, wood samples and fabric swatches, I ended up with bamboo floors, koa-laminate hardwood cabinets, and retro floral fabric from Sunbrella. The only item retained from the original interior was a section of the door panel embossed with “Sportsmobile” on the original yellow leather. 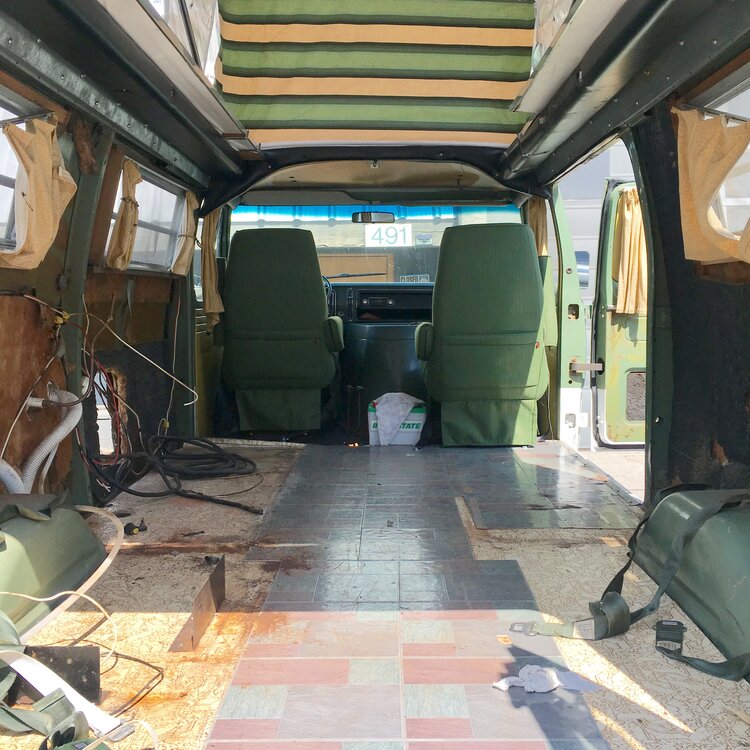 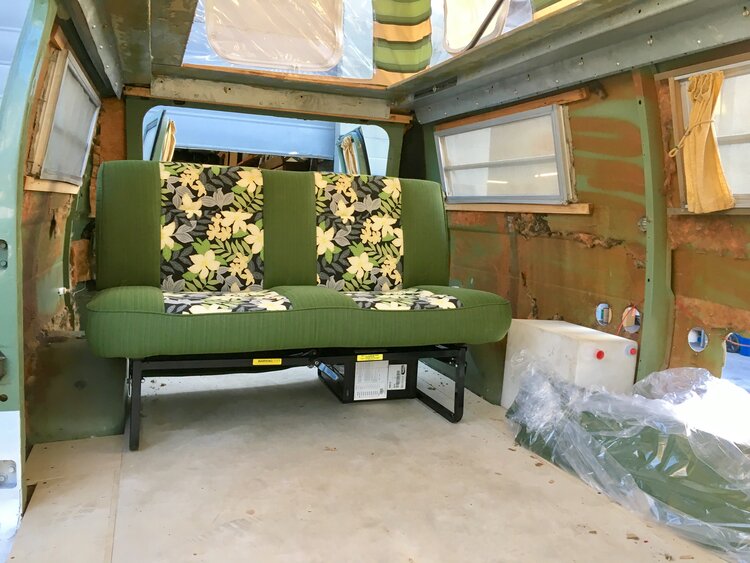 The best thing about designing and building your rig from scratch? You can customize everything. I found vintage hula and honu (turtle) knobs for the cabinets and drawers. I added bluetooth color changing LEDs around the van and roof for lighting. All the countertops were sourced from diner suppliers to keep that vintage feel. I had a ukulele custom painted to match the interior fabric. And when I don’t feel like jamming myself I can stream to my portable bluetooth speaker made out of a vintage suitcase from Loud Luggage. The end result is an interior that retains a retro vibe but has all the modern comforts and functionality.

The last step in the build was to get the van running as good as it looked. There was a lot of stress, in addition to wasted time and money over the next 18 months to get the van where it is today. Nothing on these old rigs is simple, and there were a lot of challenges dialing in the motor. I originally tried a FiTech system but couldn’t get the timing right and ended up with an Edelbrock Pro-Flo 4 system. I also had to re-build the new fuel system that was poorly fabricated the first time around. A lot of short cuts were done by the first shop I worked with which delayed the process and created more problems down the line. The end result was pretty much a full mechanical rebuild from engine to the brakes, several times over.

By far the best upgrade was the 4-wheel disc brakes with hydroboost. Trying to stop a 4x4 E300 loaded with a camper interior was nerve wracking to say the least. Fade and a mushy pedal would be felt on even small hills. It took a while to find all the components given that my axles are 8-lug. Once we had all the parts in my shop suggested we upgrade from the vacuum booster to a hydroboost. Putting all this together felt like a new ride! Having confident brakes on the 808Van was when I finally started thinking about future adventures rather than future projects. 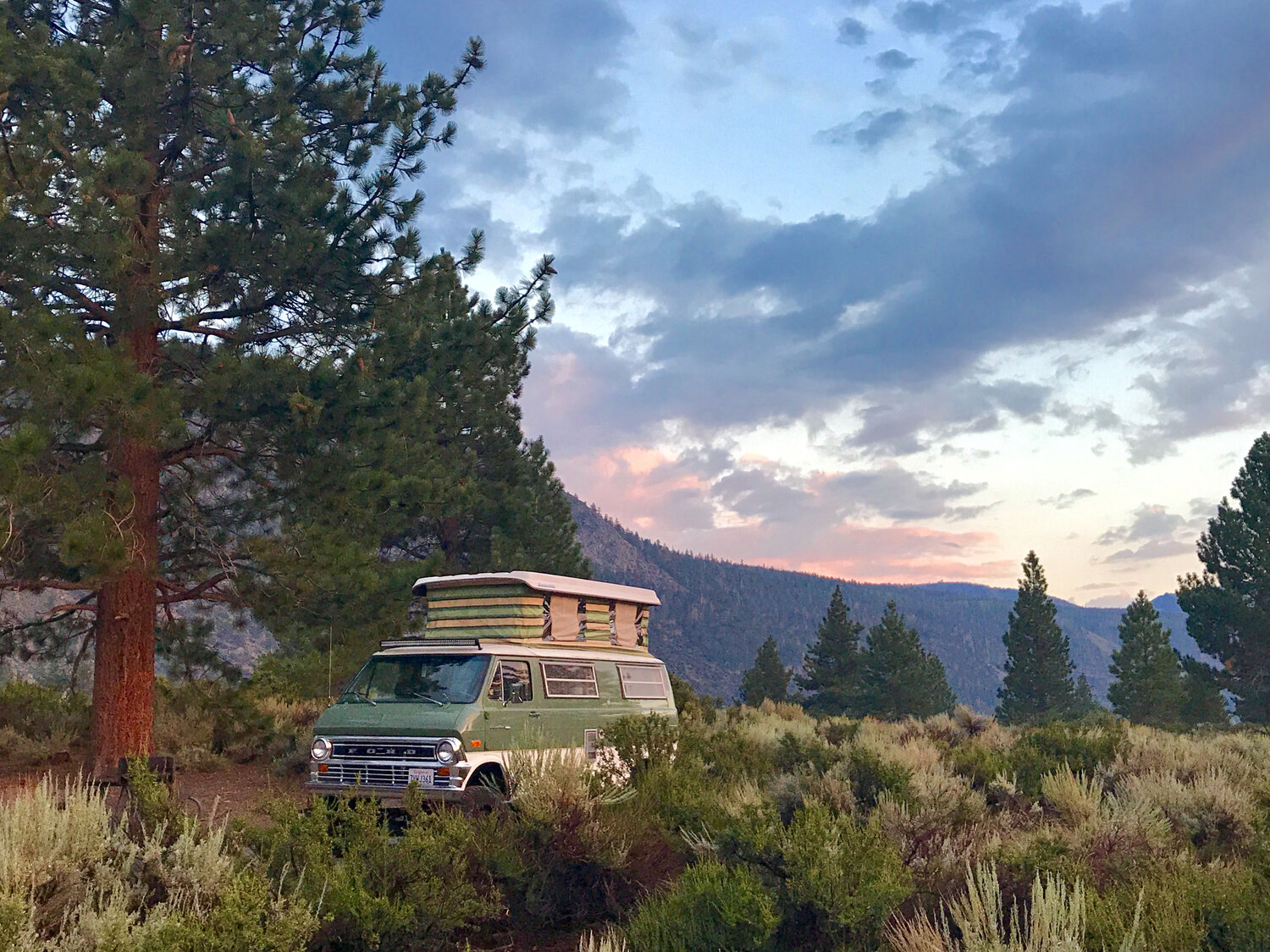 But wait, there’s more! Over the past few years the 808Van has left me stranded on the road a few times. Sometimes due to old parts breaking or new systems that needed more work. Being stranded on public roads is unfortunate. Being stranded off-road is dangerous. Before taking the 808Van anywhere too remote I wanted to make sure it had the basic overland gear to deal with recovery.

Like with the brakes, sometimes the smallest upgrades make the biggest difference. Replacing a pitted 50 year old windshield and upgrading to LED lights brought visibility to a whole new level; and having a modern dash with additional gauges let me keep a closer eye on the engine and transmission. At this point it almost feels like I am driving a modern rig! 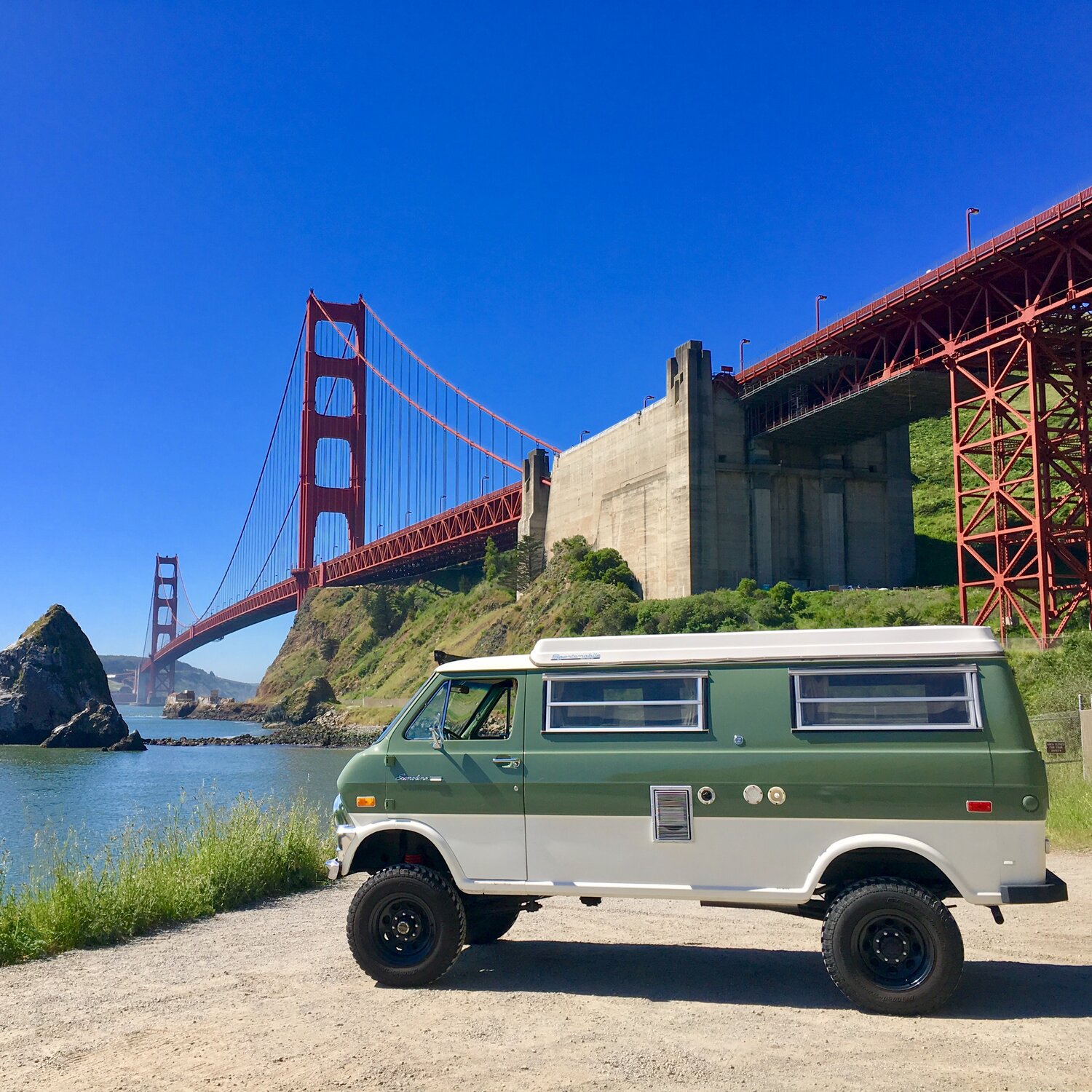 Well, of course, as soon as the van is ready to really hit the road we are all now stuck sheltered-in-place. I have two dream adventures I pass my time planning: 1) Retracing a previous route I took through Utah up to Banff and 2) Bumming around in Baja for a month with my 1970s Triumph mounted on the back.

Building the 808Van was in itself an adventure: drama, excitement, stress, and more money than I ever anticipated. As cool as these old vans are its difficult to recommend my experience to anyone. Maybe I’ll feel differently once I have the chance to fully enjoy the build. Would I ever sell it? Maybe, but not for anything less than “Sprinter-money,” and not before I get at least one of those dream adventures done.