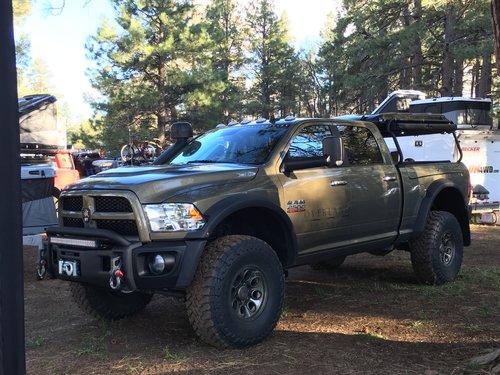 AEV equipped RAM 2500 crew cab at Overland Expo West, 2015. The bed rack was custom made by AEV and may eventually be available to the public.

I was fortunate enough to spend some time with AEV’s RAM trucks at Overland Expo West this year. I have to say, Dave Harriton and his crew have done a tremendous job transforming the RAM 2500/3500 trucks into capable, high quality off road machines. I was so impressed, that when the difficult decision was made to trade in my beloved JK for a truck, I drove straight to the RAM dealership. Okay, maybe not straight to RAM, I did test drive the Ford F-250 Powerstroke, but the driving characteristics and familiarity of the construct materials of the RAM ultimately won me over. The availability of a full line of upgrades from AEV didn’t hurt either. 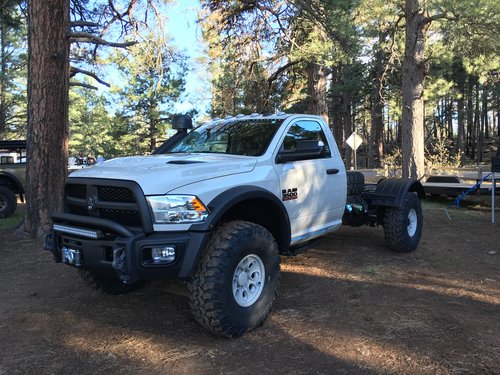 Before getting into exactly how the RAM won me over, I feel that I owe the Jeep owners out there an explanation for the switch. After all, I have owned a Jeep in one form or another since the inception of my overland endeavors. I purchased my 2012 Jeep JK after I decided that I could no longer live with my highly modified 1998 Jeep Cherokee XJ. The long arm suspension was great for climbing over rocks, but the rattling, knocking and strange on pavement tracking characteristics of the arrangement were more than I could handle everyday, so I upgraded. 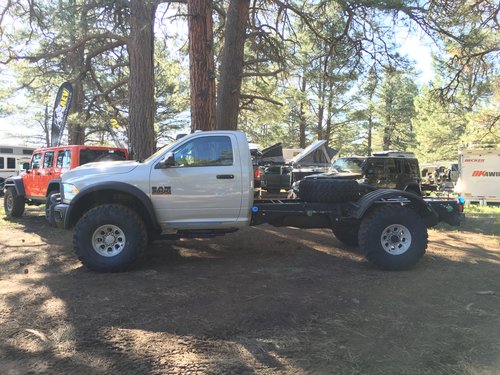 I call this one the "Blank Slate". Just imagine a large popup composite camper fastened to that long bed frame!

After scouring the far corners of the internet, I ended up finding a lightly used  2012 Call of Duty MW3 two door Jeep JK no more than five miles from my house. The dealer was more than willing to haggle on the price as no one seemed interested in a Call of Duty clad Jeep. As it turns out, neither did I. Once in my garage, I set out peeling off the huge chrome “MW3” fender badges with a heat gun and gentle persistence, blacked out the high contrast white on black “Call of Duty” stitching on the headrest and seat backs with a black fabric pen, ripped the large skull patch from the rear carpet, and tossed the tire cover in the bin. I then applied a set of factory “RUBICON” hood decals from the dealer. Tattoos of regret removed, my Jeep was reborn a Rubicon with AEV produced bumpers. 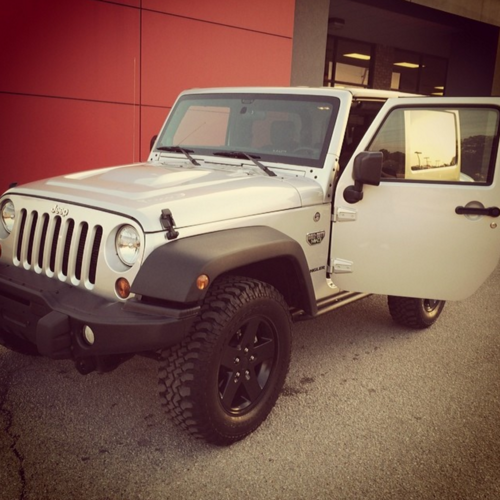 I drove the little Jeep everywhere, several trips to Moab -including Easter Jeep Safari, off road parks, camping  trips, got lost on forest service roads in the south, explored the expansive beauty of the American backcountry and yes, even went to the mall once. I loved the short wheelbase and the ability to do a zero-point-turn in the middle of my neighborhood street, the ability to tackle nearly every road or obstacle in 2WD, and the un-Jeep like acceleration of the peppy little 3.6 V6. I suffered through the road noise, the bug collection that quickly gathered on the flat, vertical windshield, the water leaks, blazing radiant heat from the hardtop in the Summer, the doors that wouldn’t stay open, and the embarrassingly low 2,000 lb maximum tow rating. With the exception of that last shortcoming, none of these regrettable traits made me love the Jeep any less. In fact, the towing capacity and lack of payload were the only determining factors in the decision to move to a truck. 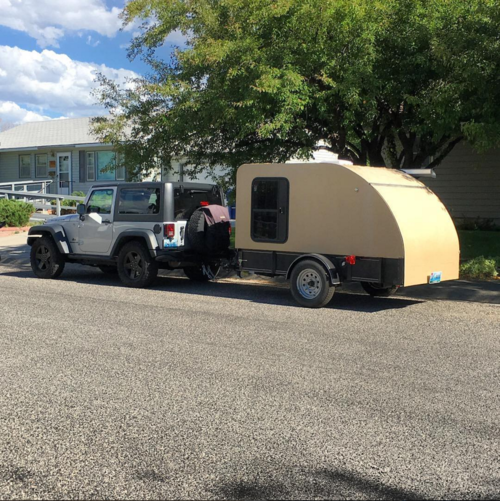 When my wife became pregnant, she asked for a camper upgrade (we were using my handbuilt teardrop camper at the time). She wanted a “real bathroom” and the ability to stand up and walk around inside when weather or insects became unbearable. Unfortunately for the Jeep, it was the only two door vehicle in our garage, and was by far the least baby friendly of the two. As sad as I was to see it go, I was ready for a proper pickup truck. I do a lot of woodworking and, as such, I need to haul heavy loads of wood. 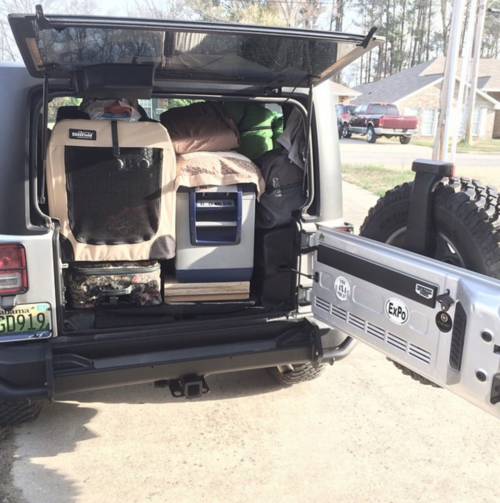 With the back seat out, it is possible squeeze in a fair amount of items. Fortunately, most of these items were transferred to our teardrop camper a few miles down the road.

I’ve had trucks in the past, but it’s not until you find yourself once again behind the wheel that you realize all the things you needed it for. Trucks are, afterall, the truest of utility vehicles. Sure, they don’t hold a candle to a proper Jeep Wrangler off road, but they can haul loads, tow trailers, and provide a higher level of comfort. Yes, there will be compromises, I have no arguments there, but the overall package is much more useful in so many aspects. The hardest part was choosing which platform to build off of. 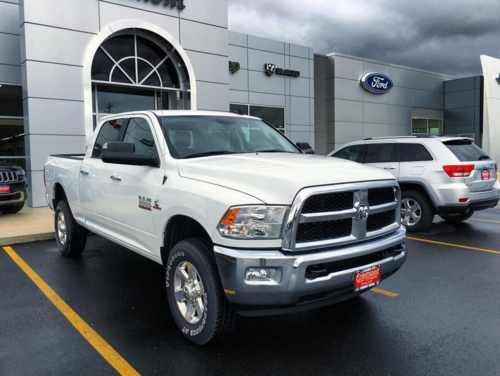 Having committed to finding a truck, I found myself researching like mad to determine which truck would best fit our needs. Finding opinions was easy, finding facts was far more difficult. I spent too much time on the Ford and Dodge websites, online forums, speaking to truck owners on the street, vendors, and others in an attempt to gather as much info as I could before heading to the dealership. I can hear the Chevrolet fans chiming in, but that truck just wasn’t a good fit for me. The high price point of the Chevrolet 2500, it’s odd torsion bar front suspension and low slung, highly visible emissions components meant my decision lay between the venerable Ford F-250 Powerstroke, and the Cummins powered RAM. Due diligence out of the way, I headed to the dealers. Here are my observations from the test drives.

Climbing into the RAM, I found myself in an environment more akin to an SUV than a big truck. The cab has a more modern feel than that of the F-250. I was pleased to find that the materials used throughout the cabin were the same as that of my 2012 JK Rubicon -immediately, I felt at home, albeit a heavily upgraded home, but home nonetheless.

At first, driving the RAM didn’t feel much different than the F-250. Sure, there was the big turbo lag, and the engine was more audible, producing a somewhat muffled, but welcomed diesel thrum -which made me smile. Surprisingly, the rear coil spring configuration showed no obvious comfort or handling benefits over the Ford’s traditional leaf spring arrangement. This may change when a payload is introduced, but both trucks were empty during my test drive. 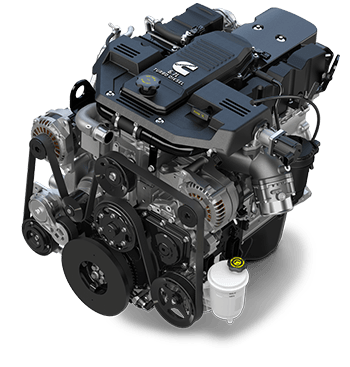 The F-250 has far better throttle response and accelerates from low speeds with almost imperceptible turbo lag. Throughout the rev-range, the Powerstroke is also surprisingly quiet, even more so than my Jeep with the hardtop. In fact, I found the silent nature of the cockpit luxury car-esque. The auxiliary switch panel in the center stack was a welcomed feature, and the reverse camera in the rearview mirror is a better placement than the info-center -which is the RAM configuration. The interior, though constructed of quality materials, was a bit long in the tooth for my taste. It felt a tad ...contractor-like, boxy. Flat. This preference of taste aside, my overall impressions of the Ford were high, and I have no problem recommending this truck to anyone who is considering it. My decision to go with the RAM was based solely on personal preference, and not overall superiority. All things considered, very little separates the two. 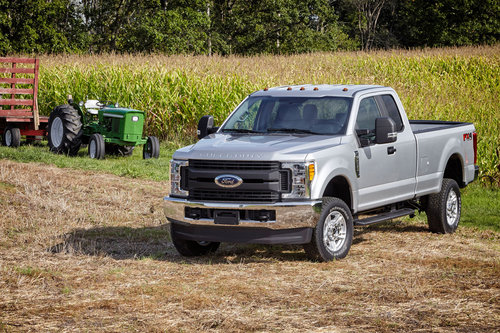 The F-250 steering was long, slow and lazy. On one particular portion of my test drive, I had committed to turning left at a stop sign, but decided to turn right instead. As I unwound the steering from full-left to full-right, I found myself daydreaming of the life of a bus driver, constantly winding and unwinding one of those large plastic steering wheels. In fact, it took so long to change direction, I had enough time to make my decision: I’m going with the RAM. Perhaps I’m a bit spoiled? I didn’t count the turns lock-to-lock, but in the end, at least one full rotation separated the two trucks. Many times in life, our decisions hinge on the smallest of criterion, this was such a time.

Looking for my first diesel powered vehicle in the age of emissions, I found the diesel exhaust fluid (DEF) gauge in the dash to be helpful in calming my anxieties towards this mysterious fluid. The Ford has a low level light that chimes on when the DEF levels breach the sub 480 mile barrier, otherwise, it’s a guessing game. The RAM’s dial gauge helps to ease this anxiety by providing a real-time visual reminder. Without going too far in depth, if DEF levels fall too low, diesel powered vehicles will go into the dreaded “limp-home” mode, limiting max speeds to 45 mph or even stopping altogether. Since this fluid has a 30 day shelf life, you can’t throw a bottle behind the rear seat for just-in-case moments, which makes it very important to keep track of. I can see why pre DEF era trucks are holding their values so well.

Purchasing any vehicle is a nerve racking yet exciting event. Perusing information online, and conducting informal interviews with actual people really helped me to make an informed decision. It can be difficult to pry reliable information from opposing camps, but isn’t impossible. Giving up the Jeep was incredibly difficult as I still had many plans for it. It will be missed, but the ability to share the camping experience with the next generation of our family far outweighs any experience the Jeep could replicate. It will be a slow process, but stick around as the RAM is transformed into a proper overland rig in future installments. 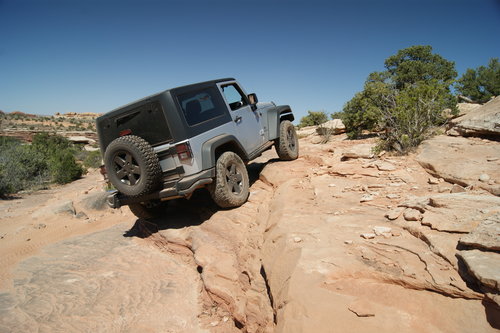 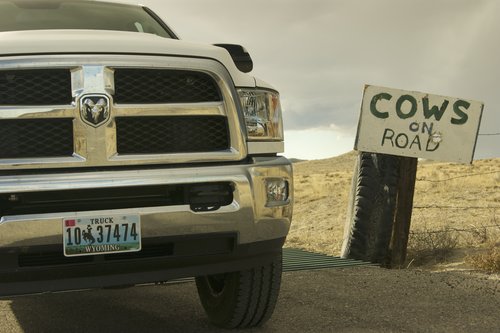 At 8,000 lbs, the RAM is not exactly light or nimble. I'm hoping some future AEV upgrades will help to transform it into a proper overland rig. Stay tuned....