Navigating the Trans-Americas in your own vehicle, from Alaska all the way south to Tierra del Fuego, has been challenging adventurers and endurance fanatics for decades. Crossing tundra, desert, jungle and mountain, what is it about this journey that so turns us on?

The idea for a Pan-American highway was conceived at the Fifth International Conference of American States in 1923. The highway’s roughly 19,000 miles of tarmac is listed by the Guinness World Records as the longest “motorable road” in the world. Though, when the network of roads was finally linked, the engineers had left a gaping hole in the middle. The Darién Gap, a 160 mile stretch of swamp lying between Panama and Colombia, has to this day never been completed. Notwithstanding such an omission, for some this impenetrable jungle, hailed as being awash with poisonous snakes, giant mosquitoes and bloodthirsty bandits, is all part of the attraction.

For the likes of British explorer Major John Blashford-Snell, El Tapón – The Stopper – as the Darién Gap is locally known, was a geographical obstacle to be relished. When the British Trans-Americas Expedition determined that two Range Rovers should be driven the length of the Americas, the participants could not be swayed from their decision to cross the infamous Darién Gap. Leaving a snowy Alaska in December 1971, one month later the Range Rovers reached El Tapón, where Major Blashford-Snell and his team swung into action, blasting, shoveling and hacking through the dense jungle. Ninety days later, and having averaged a distance of approximately 2 miles a day, they blundered from the undergrowth. Finally liberated, the two vehicles were free to pursue their journey south to Ushuaia at a more favourable pace. 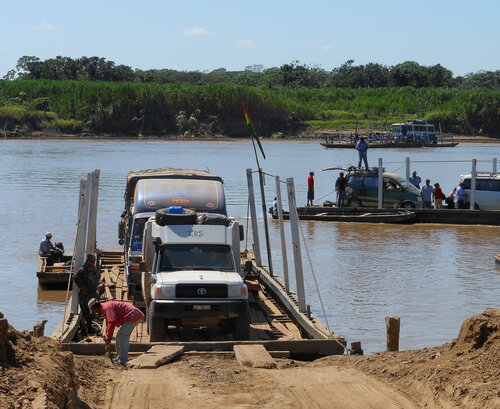 For others, the lure of the Trans-Americas has more to do with speed, endurance and breaking records. In his book, Road Fever, Tim Cahill claims to have driven the route in 23 days, 22 hours and 43 minutes. And whilst Kevin Sanders achieved it by motorcycle in 35 days, Michael Strasser romped home on his bicycle in a commendable time of 84 days, 11 hours and 50 minutes. George Meegan, on the other hand, had a more sedate approach. He walked the 19,019 miles in 2,426 days.

My own Trans-Americas dream was fired during the winter of 1980 when, as a young man, I was captivated by a then unknown author’s recently published book. Bruce Chatwin had visited an extraordinary country. His book, In Patagonia, stirred my imagination, for he told of a vast land once populated by dinosaurs, a country of wild Indians, hardy settlers, taciturn gauchos and curious beasts. Nevertheless, it wasn’t until some thirty years later when my wife and I manoeuvred our Toyota Land Cruiser onto a cargo ship and sailed from Europe, bound for Buenos Aires, Argentina. It was time to see what Chatwin’s book was all about. However, over the ensuing years the youthful dream had expanded. Our goal was to drive to the southern tip of Argentina, before turning our wheels north, in the hope of reaching Alaska.

After twenty-five days on the Atlantic Ocean we’d developed a longing for a glass of quality Argentine wine. Where better to find it than Mendoza, a bustling city in the shadow of the mighty Aconcagua mountain. The arid country surrounding Mendoza accounts for seventy percent of Argentina’s wine production – sufficient to slake the thirst of any traveller. Though with mid-February fast approaching, the searing heat of the austral summer would soon give way to autumnal Antarctic winds. There was every reason to make tracks for Ushuaia, along the notorious Ruta 40, a meandering five-thousand-kilometre route through the foothills of the Andes.

Heading south, it was as if the country unravelling before us, a land of mesas and lush canyons, shattered escarpments and rumbling volcanoes, had been conjured from the pages of a storybook. Often, we crossed paths with a lone rider, a gaucho and his trusty dogs, souls trapped in time, there one minute, gone the next. The British naturalist Charles Darwin once passed this way, as did Che Guevara on his Norton motorcycle. In the autumn of 1901, outlaws Butch Cassidy and the Sundance Kid fled to Patagonia, establishing their ranch house in a peaceful meadow outside Cholila. Back in 1520, when Ferdinand Magellan arrived on the southern shores of Argentina he saw smoke rising from the fires of the Fuegian Indians, declaring it the Land of Smoke. When Charles V heard of the story he supposedly shouted, ‘There is no smoke without fire’ and considered Tierra del Fuego, the “Land of Fire”, a vastly superior name.

In Ushuaia, we caught the tail-end of summer, experiencing equal measures of sun and rain and snow, every day for one week. Not much further down the road we arrived at Bahia Lapataia and simply gazed beyond the stormy waters to the mountains of Isla Navarino, Antarctica beyond. Quite sure we could drive no further south, a large wooden sign confirmed how we really had reached El Fin de la Ruta – The End of the Road. Back in Ushuaia we unfurled the map; with a glass of Beagle beer to hand we agreed our route and headed north for Chile. 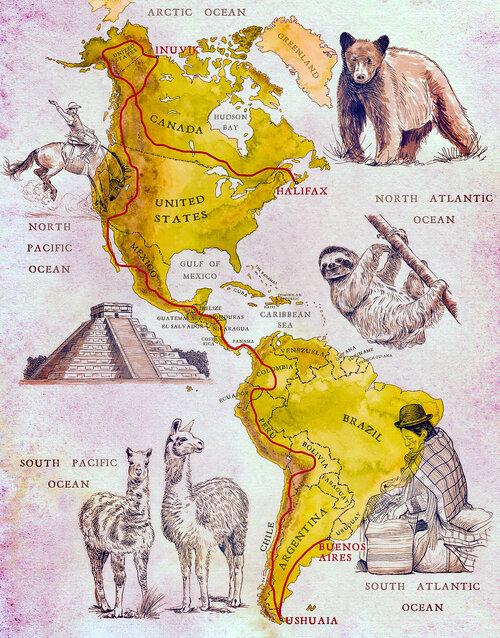 Reaching San Pedro de Atacama, a pueblo in the deserts of northern Chile, the hardship and splendour of the Carretera Austral, a classic route punching its way through the rainforests and alpine meadows of southern Chile, was already a distant memory. A long, thin country, Chile neatly funnelled us into Peru and its second largest city, Arequipa, wonderful for its colonial architecture. On the way to Lake Titicaca we dodged condor eagles and traversed our highest pass, peaking out at a smidgen below 5,000 metres altitude. Next was Bolivia, stretching south from the shores of Lake Titicaca and encompassing the Salar de Uyuni, the world’s largest salt flat. Having suffered the effects of soroche – altitude sickness – and after too many freezing nights on the salt flat we rumbled eastwards, descending from the Altiplano into the heat and humidity of the Amazon Basin. Along the way, we stopped in the settlement of La Higuera, visiting the former schoolhouse where arguably the world’s foremost revolutionary had been executed. A plaque beside the entrance declared, Che, Willy and Chino were held before being killed October 9.

Traveling through South America, the overlander is never far from magnificent historical sites. No matter how many photos I’d seen, the reality of the Inca fortifications of Ollantaytambo and Machu Picchu didn’t fail to impress. And legends concerning the Inca Empire abound; in Ecuador, deep in the Llanganates National Park, a seventy thousand llama-load of Inca treasure, weighing two and a half thousand tonnes, is allegedly buried beyond the fathomless ravines. Whilst in Ecuador, we broke from the Inca Trail to cruise the Galápagos Islands, to swim with sea lions and penguins, to be enthralled by blue-footed boobies and giant tortoises. Returning to the camper, Colombia’s roads led us to the ruins of lost civilisations, to the coffee lands and then Bogotá’s Museo del Oro – Gold Museum – housing a breathtaking collection of pre-Hispanic gold and ceramic art. It was in Colombia where we were to experience our oddest wild camp to date. Having variously camped beside the porch of a church, in an extinct volcanic crater and on the back lawn of a Chinese restaurant, we passed a surprisingly quiet night in the luxuriant grounds of a sex motel. 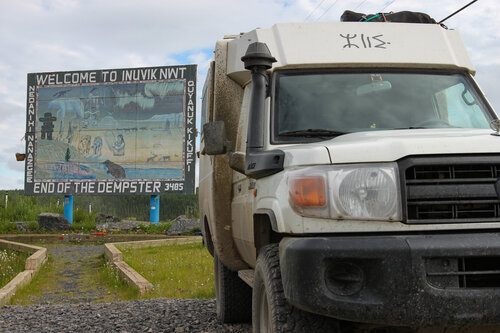 Entering Central America brought us face to face with the mindless bureaucracy of border officials, stunning colonial cities, vociferous howler monkeys and the elusive quetzal, a bird once venerated by the Maya rulers and warriors. In stamp-sized Belize, Latin-America all of a sudden vanished, replaced by pidgin English, Cockburn Lane, cow foot soup and snapper and chips.

In Mexico’s port city of Campeche, we roamed the forts that had once attempted to keep at bay such rogues as Roche Braziliano, a Dutchman with a penchant for barbequing his victims. Weaving north through Mexico, we clambered over the ruins that had once been home to the most famous of Maya kings, Pakal the Great. Later, we were led astray on the trail of the tequila slammer and, having sailed across the Sea of Cortez, lounged for far too long on the deserted beaches of southern Baja California. After kissing goodbye to Latin America, we slipped over the border into California and immediately faced one of our greatest cultural adjustments of the journey. Sweeping along a multi-lane highway dotted with shopping malls and endless residential communities, everything was trimmed and clipped, swept and washed; trees and buildings were upright and in one piece; cars had their bonnets and bumpers intact; trucks didn’t growl and belch black smoke and I couldn’t find a pothole to save my life. And since entering the USA everything had grown exponentially. Reaching the suburbs of San Diego, in the local supermarket, I wheeled a pantechnicon of wire and castors down boulevards of packaging blasted by an Arctic breeze.

In Valdez, Alaska, we met 67-year old Steve. He was wrestling his excavator along the track beside a creek. All alone he was about to start mining a three-hundred-acre gold concession he’d recently secured up in the hills, hoping to make his fortune by the next spring.

‘I’m figuring to dig enough gold to git my fishing boat back to sea,’ he drawled.

From Patagonia to Alaska, it had been heartening to witness the old pioneer spirit prevail. For my own part I was overjoyed that we’d reached Alaska, finally realising my long-held dream. Though, as with all big dreamers, there was sure to be another one just around the corner.

(James Marr is the author of Short Stories From A Long Continent – The Americas Overland.)

You can learn more about James’ travels, or purchase one of his books by visiting

To reach James, please send an email to:  jamesmarr914@rocketmail.com﻿

Words and images by James Marr