I taught middle school for a decade; I did my time. With the advent of video games, seven minutes is an eternity for a kid’s attention span. The new standard is that something new must happen every 7 SECONDS or they lose interest… Or least it was three years ago, it’s probably even less now.

My three sons have no memory of a time without personal electronic devices. They can’t comprehend spending hours staring out the side of minivan. What can I do to find a solution to keep my kids interested in more than just birds who are angry or a mouse, his mouse girlfriend and his racecar friends (this one is new and not too terrible)?

Yes, I could be one of those parents who constantly controls how much “screen” time their kids get. But I’m not. It’s exhausting to endlessly “hawk” your kids to make sure they’re not watching the TV, the laptops, their Kindles, the extra smart phone or staring across the backyard into the neighbor’s living room. Sorry, if I don’t live up to your expectations of parenting. We have ground rules and limit their time, but we need more solutions than that. The technology isn’t going anywhere. Unless Skynet does happen, then we’re doomed anyway.

My favorite times as a kid and strangely as an adult are when I am completed disconnected. No phone, no computer, no Wifi, nothing. It’s quiet, calm, tranquil. It’s bliss.

Don’t have a panic attack while you read this on your mobile device/laptop. I’m not saying it’s all evil, but all the time on your device probably isn’t the best for your self-esteem and emotional health. Smarter people have written articles about that stuff. 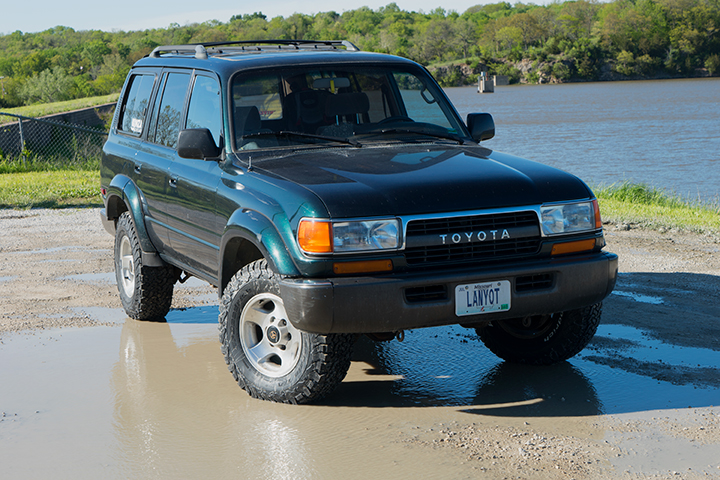 Step 1- Get a vehicle I can work on that will get all five of us to no signal.

I started doing the research. After owning and off-roading a ‘04 Wrangler while living in Florida, the Unlimited version (4-door) seemed perfect. But I didn’t and still don’t have the $15k for the cheapest 4-door Wrangler on Craigslist.

Next up was the squarebody Suburbans (1973-91). While these would provide the most room for all five of us, be capable, easy to work on, and the best for the eventual LS swap; the rust damage was apparent on all available options until we were well out of our budget.

I’ve always had a thing for Toyota Land Cruisers. Capable, comfortable and reliable as hell. A reputation that the Land Cruiser has earned year after year in some of the most inhospitable environments on the planet.

Local searches weren’t delivering anything that seemed useable. Lots of Tacomas and 4Runners, but no Land Cruisers in our price range. 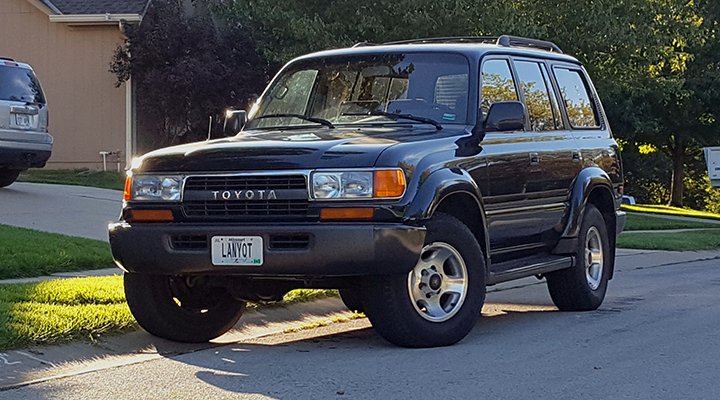 Then my uncle called. He purchased a 1994 Toyota Land Cruiser FZJ80 new. That truck with its 4.5L inline six and modest 212 horses/275lb.ft. had pulled his bass boat, battled winter storms, and taken my cousin to hundreds of basketball tournaments throughout the years. All while staying reliable and capable.

Eventually he grew tired of the 1994 Land Cruiser and it was loaned out to one of his business partners, returned to my uncle for my cousin’s years of high school driving (blowing all the speakers), was loaned out again to let a friend’s wife daily it and was finally retired to serve as my cousin’s dog-mobile for his Great Dane and English Mastiff. 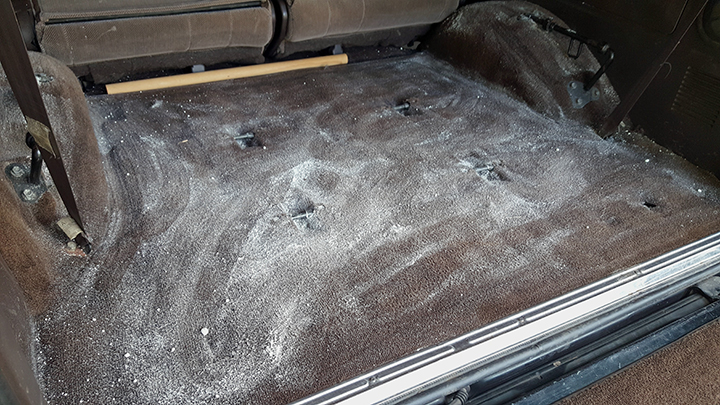 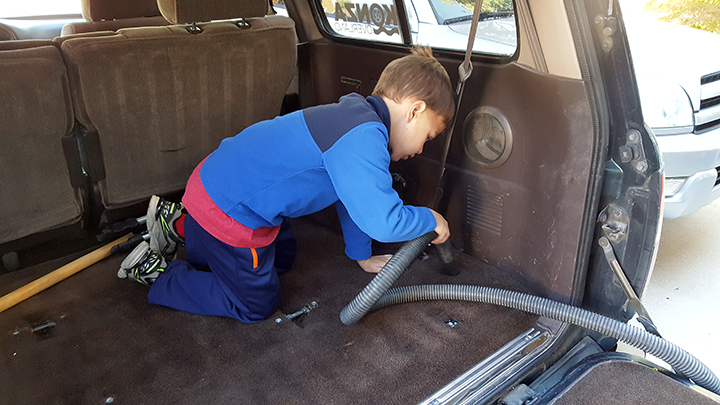 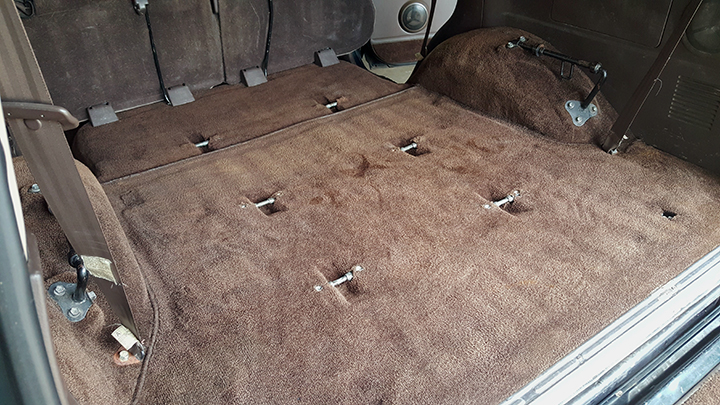 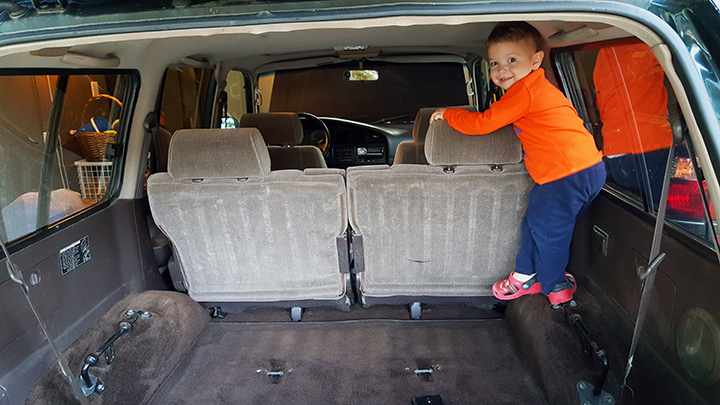 The years have taken a toll. There are scratches, scrapes, dents and cracks. But it still works. My cousin decided his Audi Q5 would work as his dog mobile, so my uncle called to ask if I was interested in what has become affectionately known as “The Land Yacht.” My uncle boats, and likes boaty things, this is/was his land-based version. The truck still retains a yellow-rubber key chain float hanging from the rearview mirror.

I grabbed the Land Cruiser from my cousin as quickly as I could. First impression: “Dear God, what have I done…” It was loud (exhaust leak and wind noise from a leaky sunroof), the steering felt loose, it was slow, smelled of dog and was covered in dog hair. The radio was shot and all the speakers were blown.

The 4.5L inline six needed an oil change and some loving care. It still leaks oil and is slow. The tires had decent tread depth but were cracked on the sidewalls and flat spotted from sitting. 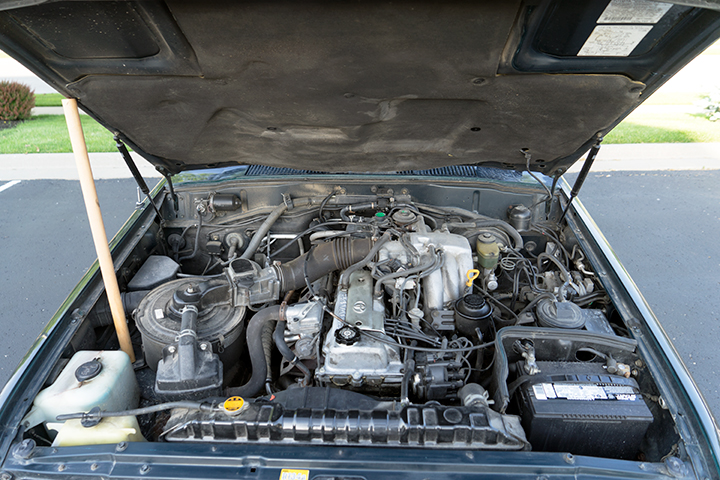 The first step was to use Pet Scent Removing Carpet Cleaner on the storage area. Twice. Three times. I’m still vacuuming out canine hair and some non-canine hair; gross.

I pulled the radio and let my five-year-old tear it apart (because that’s what you do), only to realize that the fuse for the radio was blown and that the radio probably was just fine. Oops. He enjoyed tearing the head unit apart and I listen to music through a Bluetooth speaker now.

Once I got the cigarette lighter power again (same fuse as the radio), I installed my old Cobra CB radio from my Wrangler and went with the magnetic antenna on the roof. At least we’ll have some form of communication, but I’m already considering the longer-range HAM radios. 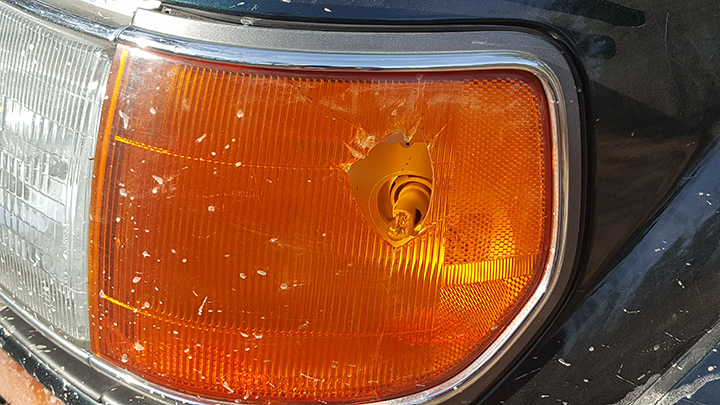 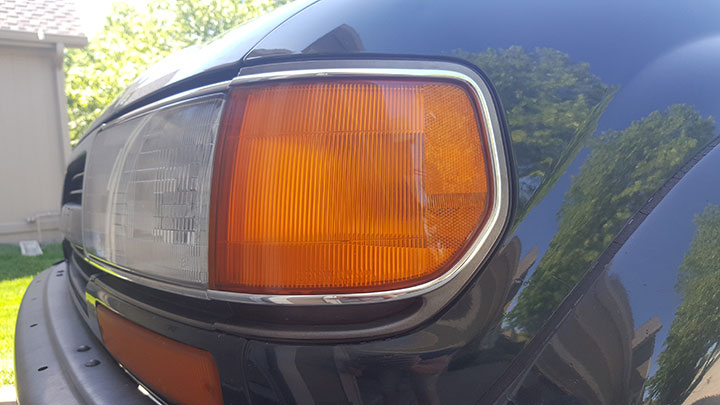 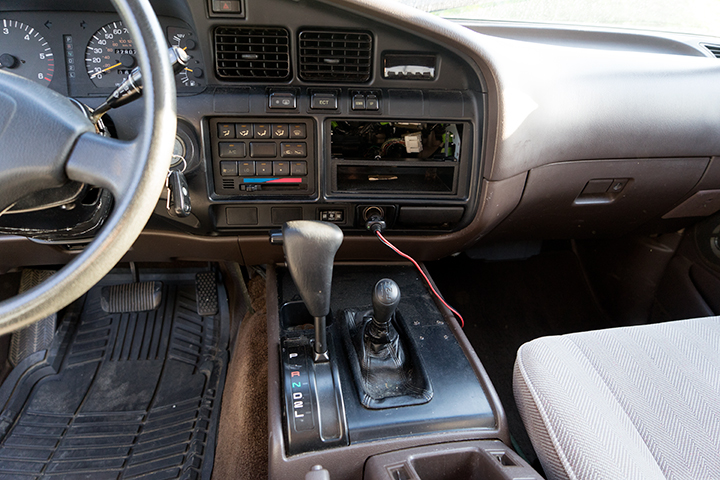 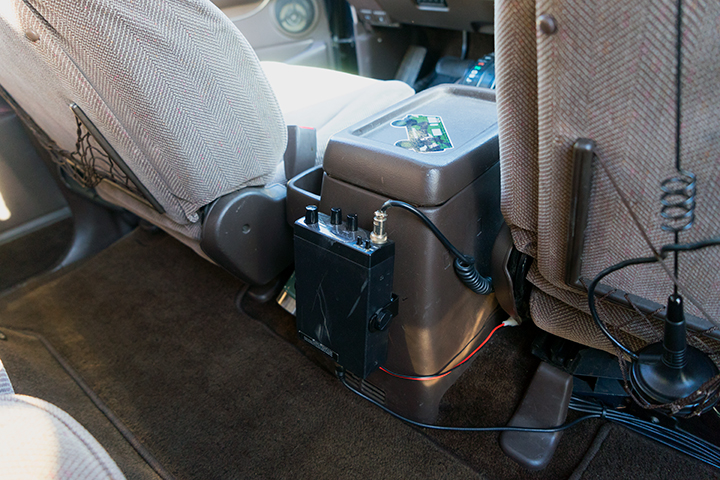 I pulled the running boards because #weightreduction. The mud flaps were removed because the left rear one was broken and I didn’t want to only have one installed. Is it inappropriate to add Rally Armor mud flaps to an SUV? Probably. So, I’ll have to continue looking on eBay for a reasonably priced replacement left rear mud flap and a set for the front. Unless Rally Armor is cool then those, but probably not…

The easiest modification wasn’t really a modification, just the best decision I could have made for this vehicle. The spare was completely bald and while it seemed to be holding air, it and the other four tires were not the most reassuring when we’re talking about taking the whole family out into the wilderness. The Land Cruiser has a great reputation for off-roading and BFGoodrich K02’s share the same reputation in the tire world. The K02s have new technology to strengthen the sidewalls and improve off road performance when aired down. By installing five BFG K02 275/70/16’s, the truck was immediately off-road ready. And looked good. The performance on road has been the exact same. We’re now ready to get lost. 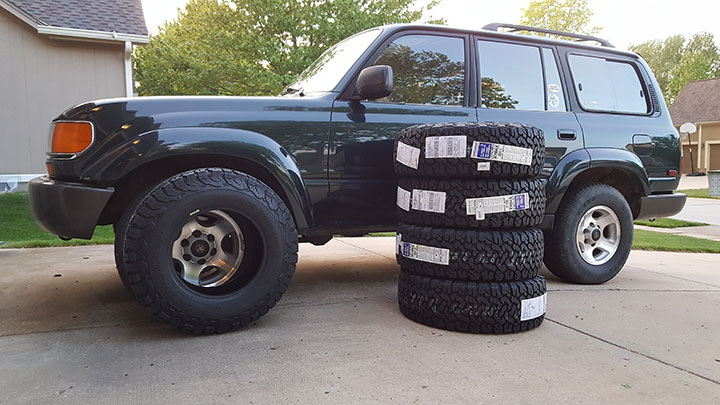 There are more modifications planned, but like any automotive project money becomes the limiting factor on how fast and far you can go. I’d like to add a set of Hella/KC driving spotlights to sit either side of the “Toyota” on the front bumper, some yellow LED fog lights, a snorkel, off road front and rear bumpers, a rear tire carrier, winch, front and rear lockers, roof rack, manta wing awning (these are so cool), some upgraded shocks, cargo system for the rear cargo space and eventually a two-inch lift. Then there’s the roof top tent. So cool, so usable, so helpful to convince the wife to camp more, but so expensive… Maybe CVT Tents is reading… If they are, Mt. Denali Extended Stargazer Pioneer, please. No pressure.

The plan now is to start using the truck. I am daily-ing it, hence the car seat and booster. My oldest son thinks it’s hilarious that he can ride in the front because of a lack of airbags, but it also means no airbags.

We have some shorter weekend trips planned, but being in the Midwest the landmark trips are going to have to be in the future. Moab, Devil’s Tower, the Pacific Northwest, Grand Canyon, and Baja will all be on our list. For now, we’ll start small and local.

I can’t remember which standup comedian has the bit about taking away his kids’ electronic devices as punishment. Anyway, the punch line was not to take away the device, but to take away the charger and watch the fear settle in. #TheLandYacht is our metaphor for taking away their chargers. Hopefully it helps our kids to be more well-rounded human beings as it will force them to interact with each other and work on social skills.

I know that I’m not the first to build a Land Cruiser and I won’t be the last. I want my boys to see how other people live. I want them to be accepting of other cultures. I’d love to tour the world with them. But for now we’ll settle on seeing as much of the US as we can from our Toyota.

If you don’t hear from us, don’t worry. We might be lost, but rest assured, we’ll be outside. 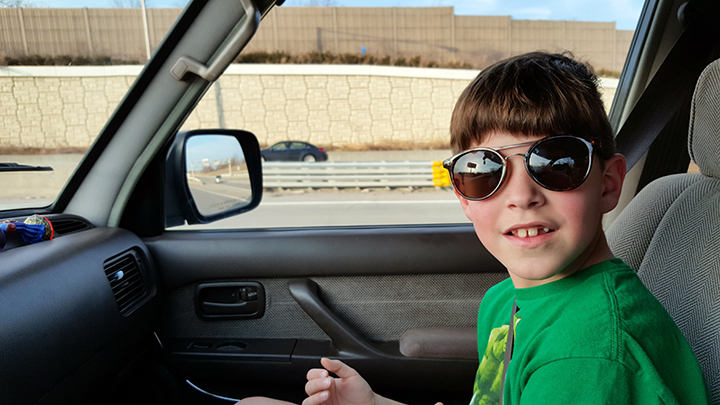 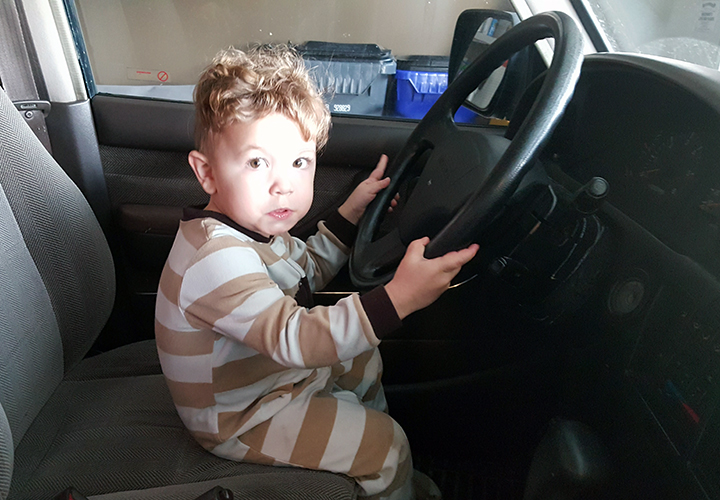 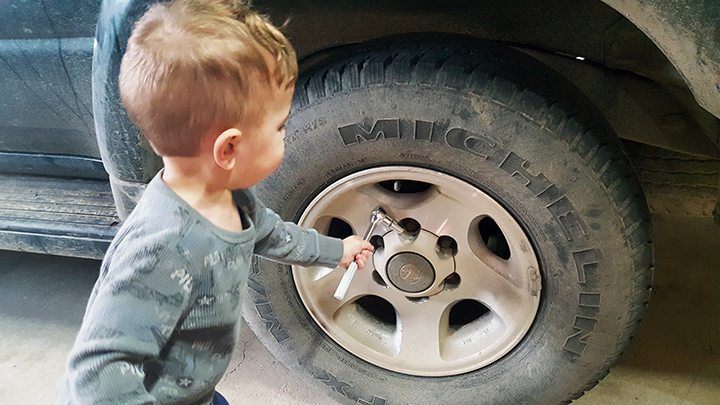 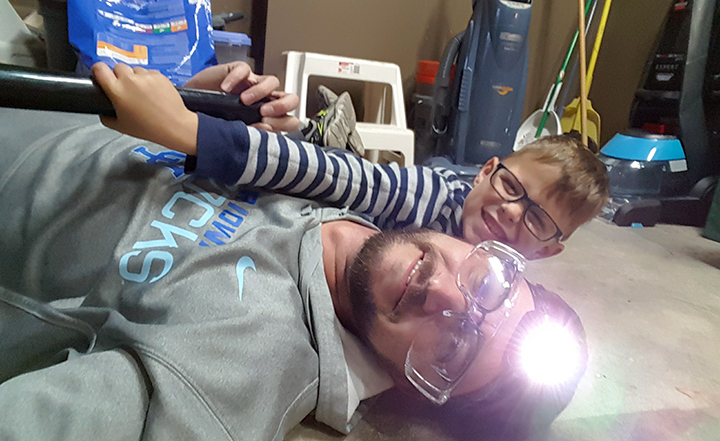 This article originally appeared on Hoonivers.com