The initial model of the Raptor was possibly the most advanced, mass-produced truck ever built. Despite this achievement, Ford knew that they could do better. Enter the completely redesigned, all new 2017 F-150 Raptor. Poised to kick it’s predecessor off the podium, this truck is chock full of high tech improvements. The largest change comes in the form of the military grade aluminum body and composite hood and fenders. Ford claims that this body saves 500 lbs over the previous steel version. Not only is this a huge engineering feat, it’s a big deal for performance. Shedding weight not only improves acceleration, but braking and handling as well. Any time you can increase performance by removing something, it’s a big win. 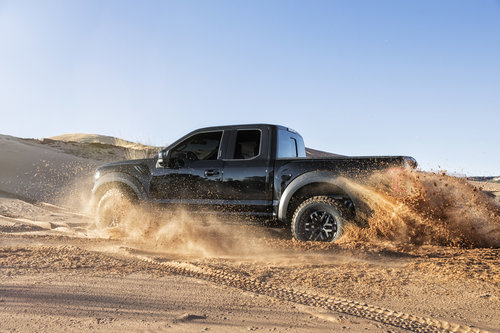 The suspension is also vastly improved. The variable damping, internal bypass Fox Shox have increased in size from 2.5” to 3”. Suspension travel has also been increased from 11.2”/12.1” to 13” at all four corners. The aluminum front lower control arms are absolutely massive providing a strong platform in which to hang the 35” BFG KO2’s and preposterously huge Fox dampers. All of these bits are hung from a highly reinforced boxed steel frame that is unique to the Raptor platform.

We realize that time marches on and technology continues to make advancements in engine technology, but we are absolutely sad that the 6.2 L V8 is no longer the heart of this beast. It has been replaced by a more powerful, revamped 3.5 L Ecoboost V6. The former V8 churned out an impressive 411 hp and 434 lb/ft of torque. The Ecoboost has increased power output to 450 hp  and 510 lb/ft of torque. This was achieved through improvements in the airflow of the aluminum cylinder heads, stouter internals, and an upgraded fuel system -twin turbos and direct injection also help to make the V6 scream. 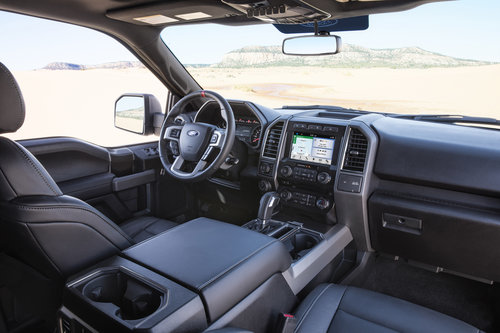 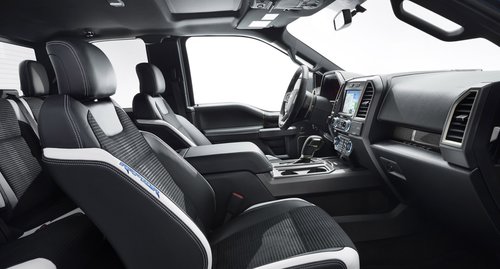 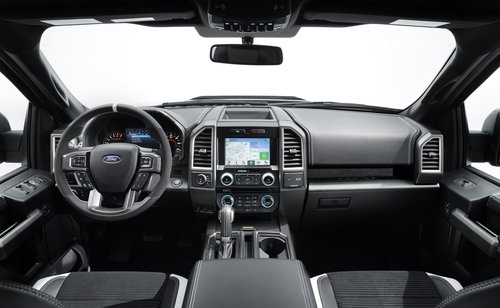 The transmission has been upgraded to a paddle shifted 10-speed which is mated to a torque on demand transfer case. The four wheel drive system is actually an all wheel drive / 4WD hybrid that can toggle between the two based on driving conditions and what mode the Terrain Select set to. Available modes are Sport/Weather/Mud-Sand/Baja/Rock-Crawl. Depending on the setting the computer adjusts throttle response, transmission shift points, rear differential lock, and steering input.

With a stroke of luck, I was able to take an unplanned test drive of the 2017 Raptor and I have to say, it truly is much better than you think. I was doing a walk around at the local Ford dealership when I eyed a salesman heading my way. Normally, this makes me want to run away, but this guy, Vince, was a great guy. After talking shop for a few minutes, he offered to grab the keys for a test drive. It’s rare that a limited production vehicle leaves the lot before at least running a credit report, but not today. I’m a gentleman, as such, I slowly eased the truck out of the dealership allowing the truck to warm up a bit before giving it the beans.

While putting around, I noticed the interior was surprisingly quiet and the low RPM torque was more than adequate even while being gentle with the throttle. I played with the front mounted camera at a stop light, honestly I don’t see much use in this little feature, but I’m sure there are some who do. Then I tinkered with the multicolored floor lighting -which couldn’t be seen because it was one o’clock in the afternoon. Who thinks this stuff up? Anyway, after a few minutes (and out of eyeshot of the dealership parking lot) I selected “Sport” mode on the dash and hammered the throttle.

I forgot to disable the traction control, so it just kind of went, no wheel spin or tire smoke, just raw acceleration. The torque curve and felt more like an electric motor than petrol. It just kept pulling at the same rate. Some of this can be attributed to the 10-speed transmission which did an excellent job of keeping the engine in its sweet spot. One thing about this transmission, I could feel it shifting -a lot. At first, I thought the engine was hesitating, but after a few minutes of hammering on it, I realized I was feeling the ever so slight dip in acceleration as it shifted. I have to say, I didn’t really like it. It felt unnatural and almost as if it had a clogged EGR valve or fouled plug. It was almost imperceptible, most people probably wouldn’t notice. Maybe I’m being nit-picky, but it was a bit discerning, at least for me.

I tested full throttle at highway speeds as well. At 55 mph, I floored it and it felt dead, as if it was carrying a heavy payload or towing a small trailer. A glance at the gauges revealed that despite the lack of perceived acceleration, the truck was gaining speed quite rapidly. I attribute the numb acceleration to the high seating position (I’m used to driving highly modified Porsche, which place the driver’s hindquarters mere inches from the ground -providing a very different experience) which really messes with the perception of speed. The 10-speed transmission could also add to the lost feeling of acceleration by keeping the engine right in the middle of the power band. Transmissions with fewer gears have a more obvious rise and fall while rowing through the gears -which creates a much more obvious wave of acceleration.

The steering was crisp and did a wonderful job of including me in the experience. Any adaptive steering going on behind the scenes was imperceptible. The brakes were strong but not overly grabby, which is good when you are blasting over soft surfaces. The last thing you want is to lock the brakes up at speed. I didn’t get to drive over any sand dunes or go over any sweet jumps, but I was able to find some rough, pothole laden roads to test out the thirteen inches of wheel travel. This is where the Raptor really shines when compared to any other mass produced vehicle. Honestly, the uneven surfaces, divots and other road deformities completely disappeared, even at higher speeds. Driving these same roads at similar speeds in either our 2013 Nissan Xterra Pro4x or 2015 RAM 2500 would cost thousands in dental expenses.

I would love the opportunity to conduct a proper test in a more appropriate setting, but I recognize the fact that I was lucky to get my unplanned test drive. Overall, I’m absolutely smitten with the new Raptor. My vehicle was $79,062 as tested. If you are interested in this truck, you can find it at Fremont Ford in Riverton, WY. Go see Vince and tell him Brandon sent you. 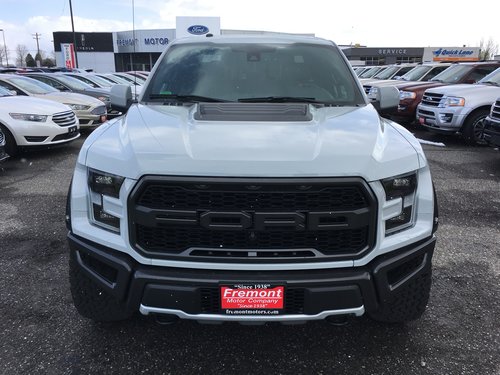 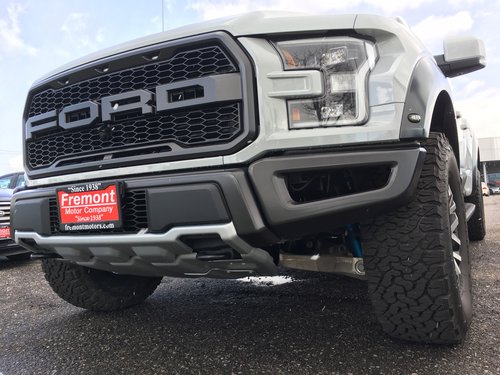 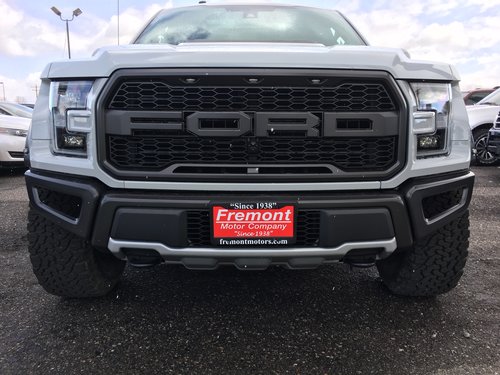 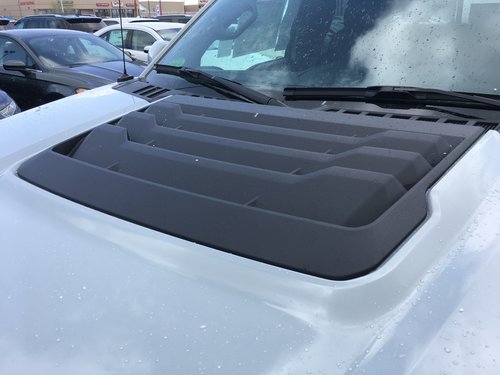 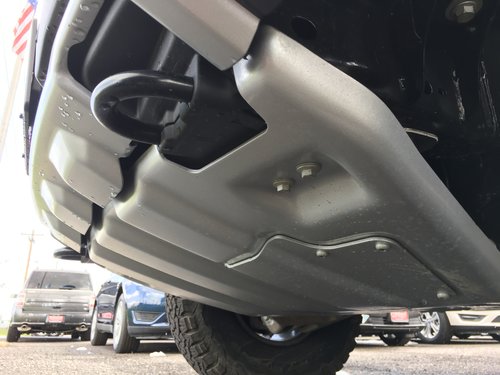 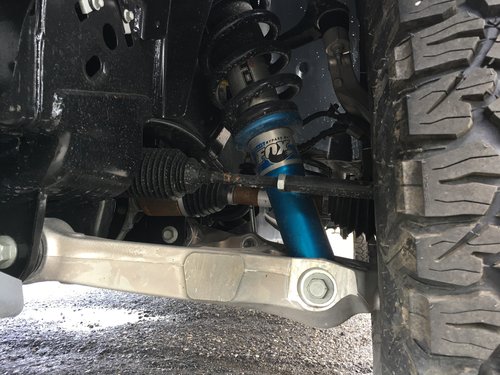 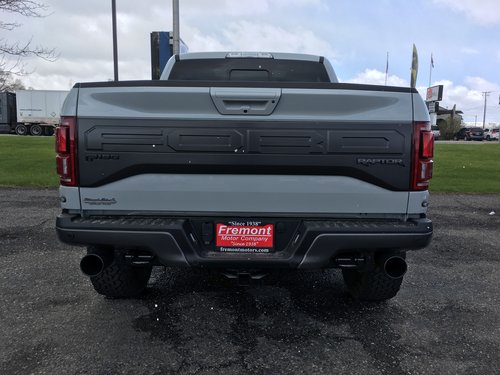 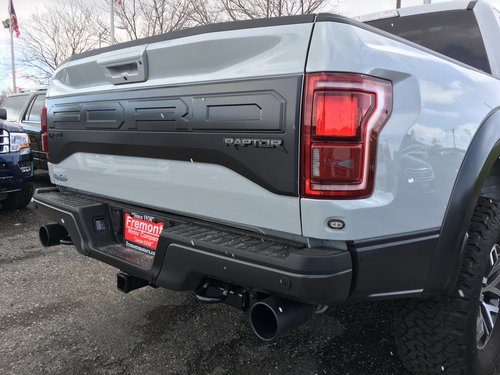 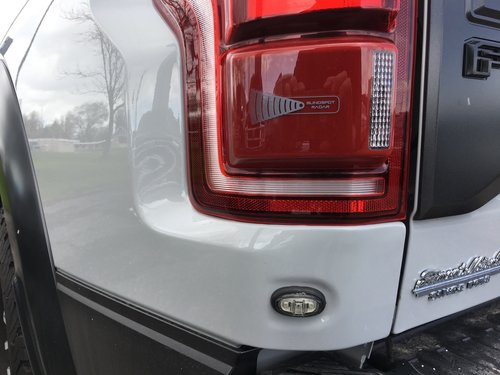 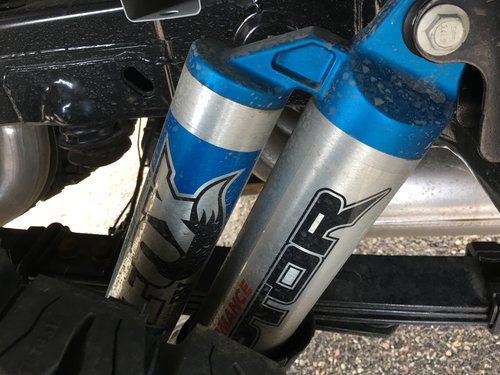 The FOX bypass shocks are massive! 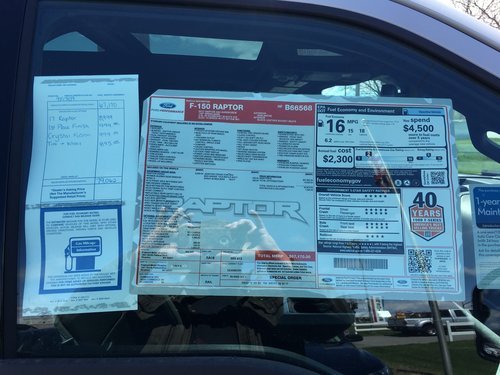 For reference only. We are not affiliated with Fremont Motors, nor do we represent them in the sale of this vehicle.