We’ve all seen the billboards along the highway. Exotic Game Reserve. We’ve laughed at the idiots who take videos of monkeys ripping off their wipers and ostriches leaning in windows to steal their snacks. I have never had any interest to visit one of those tourists traps. But when your kid is massively interested in animals, you begin to make different choices.

I still refuse to visit the exotic game reserve in the area, but I am down for introducing my boys to more of the natural wonders in the Midwest.

Research completed and I found a herd of wild bison; not in some farmer’s field, or in a zoo, but wild bison. Located two and a half hours southeast of us. The Maxwell Game Refuge is run by the Kansas Department of Wildlife and Parks. 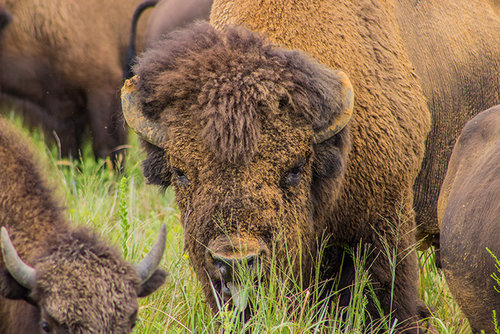 The refuge and herd date back to 1859 when the Maxwell family drove a small herd of bison onto land surrounding their homestead. The Maxwell family wanted to preserve a piece of the prairie with a roaming herd for future generations. In the mid 1900s the family donated 2,500 acres to the state of Kansas. The herd is kept between 50 to 125 with the surplus bison being auctioned off each fall.

While I’ve been around since the ‘80s and I have spent a vast majority of the following years in the Midwest, I have never heard of this place. I remember history books talking about the prairies being so full of bison that you couldn’t see the grass. I’ve played the Oregon Trail video game. I’ve hunted for way more than I could ever carry back to my wagon. This trip was to give my boys a small sliver of what wandering the prairie might have been like.

We loaded into the Land Yacht on a surprisingly cool day. Morning temps in 50s. With the AC still out (I have a replacement evaporator. We’re getting so close to cool air again!), we wanted to make sure that it wouldn’t be too hot for the boys in the Land Cruiser. An added benefit of the cooler temps, the bison are more active.

The trip down wasn’t eventfully other than the usual shenanigans of three brothers confined to the back seat. Yes, the phrase “I’m not touching you” was said. A pit stop halfway there, another hour on the road, and we arrived in the town of Canton, KS.

This is where the fear sets in. As the father/tour guide of this bunch, my concerns are always about if the site we are about to visit will measure up in their electronic-filled, YouTube-shouting, video-soaked minds. Just like how the Internet has ruined 400 horsepower sports cars, I was worried that the crap they’ve seen on the Internet would ruin this real life experience..

Canton is a small town, population 720. There is a Casey’s, so it’s not too small a town. Every corner of Main St. had a tiny bison statue on the curb. My hope was beginning to rise. If town is advertising the animals then maybe we would actually see a herd of wild bison.

We drove over a cattle grate when we entered the Maxwell Game Refuge. The boys were all keenly looking outside the Land Cruiser for any glimpse of wildlife. We saw nothing. There aren’t a lot of trees in Kansas and you can generally see quite a ways into the distance, but no bison.

We drove over another cattle grate in a couple minutes. Was that it? Two and half hours for a no show. Poop.

There was a small sliver of hope. We could see the Observation Tower coming up on the left. If anything, I’d let the boys climb up and down the fifty year old metal stairs a bunch of times. That would be a story for them. Their playgrounds are all covered with plastic and rubber. This was old, exposed metal. The Tetanus boosters are all up to date.

We pulled into the parking lot and saw them. The herd was lounging in the grass surrounding the tower. Whatever else happens, this trip is a win. I had brought my boys to wild bison. 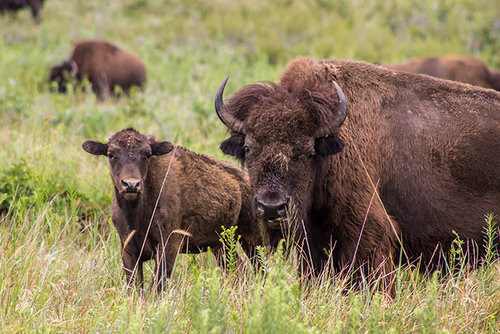 The next half hour was spent with them constantly climbing up and down the tower stairs and running back and forth in the parking lot. No big deal when you’re the only one in the parking lot. The bulls of the herd were vocal and the boys were trying to mimic their grunting noises. Very caveman-like. 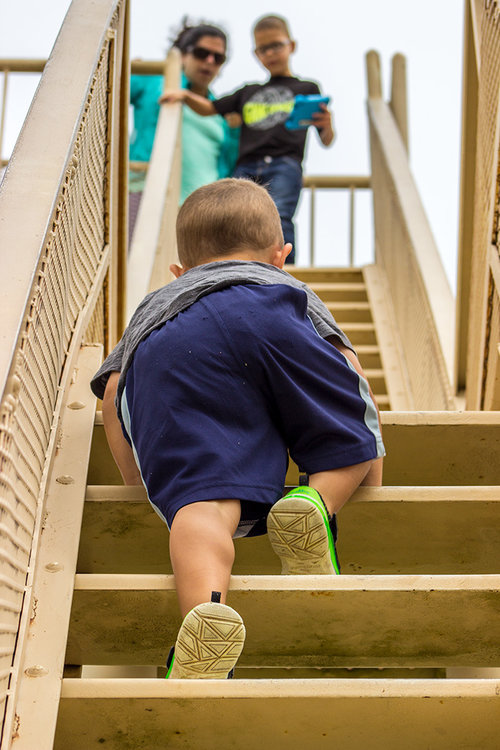 Eventually the herd tired of us and began to move on. I noticed that the leading edge of the herd was walking across the road we had just been driving on. Yep, you guessed right. I wanted to “run” with the bison. 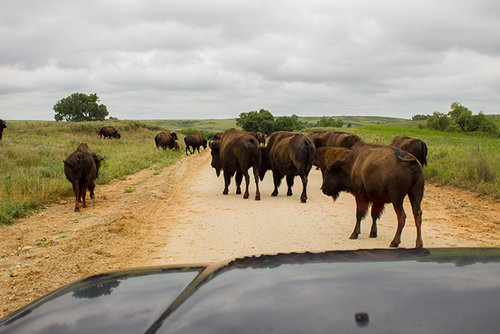 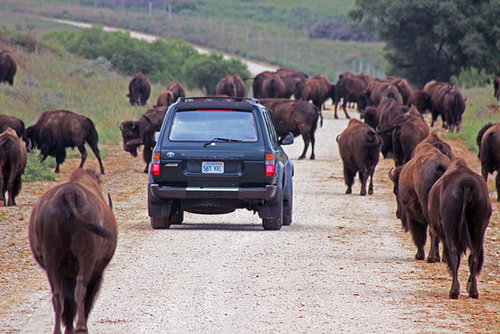 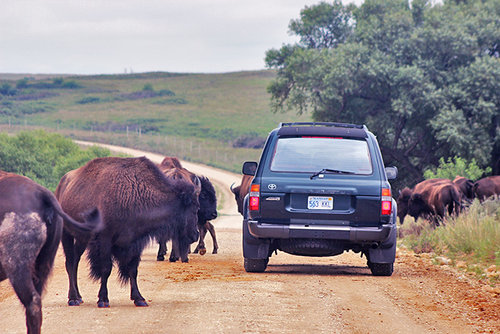 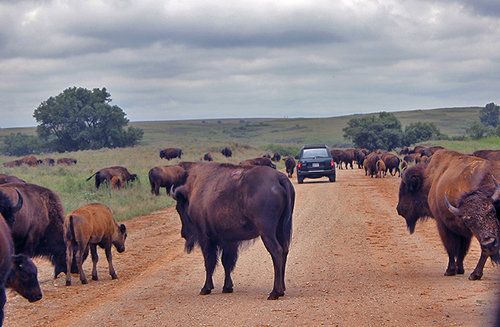 We loaded up and headed down the road. It didn’t take long for me to immediately realize that this was a bad idea. Turns out I care about the Land Yacht more than I had realized. I started to think about a four to eight hundred pound animal turning and smashing their full weight into our 1994 Toyota Land Cruiser. I fully expected the truck to hold together enough that the boys wouldn’t be in danger and I knew if one of them turned on us the body work was doomed. There was so much fur, bulk and horns.

I was the epitome of patient. Certain individual bison made me uncomfortable. I would drive around most of them by a wide margin, but there were those who would make sure that you had to go through them. We didn’t hit any of them and they mostly ignored us. As the Land Cruiser would approach them, the bison would turn, look at us and then just mosey on. But when they turned to look, there was no telling what their next move would be. It was more stressful than I anticipated. We survived unscathed. The boys wanted to turn around and drive back through. We did not.

There is a state fishing lake nearby, and it has the only restroom facilities (outhouses) until we got back to Canton, so we headed for that. The delightful flavors of the outhouse helped sooth the adrenaline rush of surviving the herd without body damage.

The boys were disconnected from their devices. We spent time as a family. We created a real experience. That is all that I’m trying to do with this Land Cruiser; get my family outside, together, and make memories. This experience will be hard to forget. Kid 3.0 will have the most difficulty remembering being in a bison herd, since he’s only 2.5 years old, but that just means we’ll have to go back. 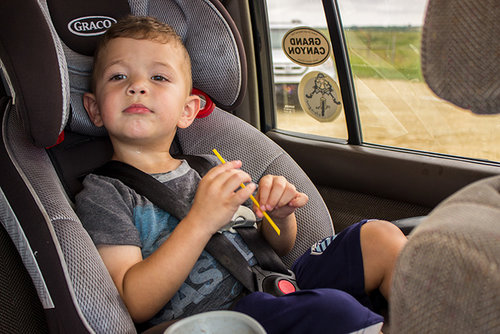 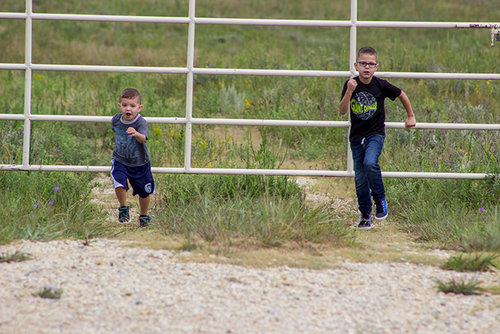 Maybe next time we’ll go in a Unimog or M1 Abrams. Seriously, bison are super intimidating up close!

Final note: Kid 1.0 had to fill out his favorite vacation for school this year. We’ve been to Disney World, Florida, NYC and Colorado in the last couple years. He picked this trip to see wild bison as his favorite. #winning

This article originally appeared on hooniverse.com